I was recently hired to code a series of indicators based on monthly articles in the Stocks & Commodities magazine, and to write here about the details of indicator programming. Looking through the magazine, I found many articles useful, some a bit weird, some a bit on the esoteric side. So I hope I won’t have to code Elliott waves or harmonic figures one day. But this first one is a very rational indicator invented by a famous algo trader.

You know the problem with indicators: the more accurate they are, the more they trail behind the price. In his books and seminars, John Ehlers has repeatedly tackled this problem, and proposed many indicators with little, if not zero, lag. His new indicators from the article “Reflex: A New Zero-Lag Indicator” in Stocks & Commodities 2/2020 are supposed to remove trend from the price curve with almost no lag. They come in two flavours, ReFlex and TrendFlex.

The algorithm of the ReFlex indicator:

The algorithm of the TrendFlex indicator:

So the indicators are a filtered and normalized moving average, but of price differences. Ehlers provided TradeStation code that is very similar to Zorro’s lite-C, so coding the indicators was a matter of minutes. Here are the C versions:

Data is the price curve and Period is the N from the above algorithm description. If you are familiar with C programming, the only unusual line that you encounter is this one:

This line allocates time series to the variables Filt and MS. So far so good. But if you allocate a time series for an indicator, it is very important to fill it with the correct initial value. Here it is Data[0], the most recent price, for the Filt series. What happened if we filled it with 0 instead? Filt is the lowpass filtered price, from Ehlers’ “SuperSmoother” algorithm. If a lowpass filter starts with 0, it will creep veeerrry slooowly from 0 up to the filtered price. This would make the initial values of that filter useless. So this is my first important tip for indicator programming, initialize a time series always with a value in the range that it is supposed to generate.

Why are we using global time series at all? We could have defined static arrays instead. And I can see that some of my colleagues who coded the same indicators for other platforms did that. And that would be ok when the platform only supported strategies with a single asset and a single time frame. But when the indicators are called with different time frames and different price curves in the same strategy, static arrays get all mixed up and the indicators produce wrong values. If in doubt, use series. That was my second tip.

A small C script for plotting the indicators for the 2019 SPY curve: 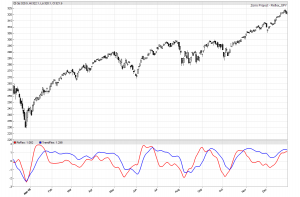 You can see that the indicators have indeed almost no lag. Remains the question how and for what you can use them. In the article, Ehlers is quite silent about the purpose of his indicators. So my first idea is using them for trade signals. Since they follow the peaks and valley of the price curve with no lag, my idea was entering a long position at a valley, and reversing to short at a peak. So I added these lines to the plotting script:

But alas, the result is no good. And it does not get much better when I used variants for generating the trade signals, like crossovers or zones, and increase the test period. Sure enough, some variants generate positive results, but they would not pass a reality check.

However, the indicators are in the +/-2 range and have really almost no lag. This makes them a good choice as trendless inputs to a machine learning system, such as a deep learning ANN. Maybe someone finds another good use for them!

The indicators in the C language for the Zorro platform are available in the scripts 2020 archive. They can be added to any trading system with an #include statement.

10 thoughts on “Petra on Programming: A New Zero-Lag Indicator”